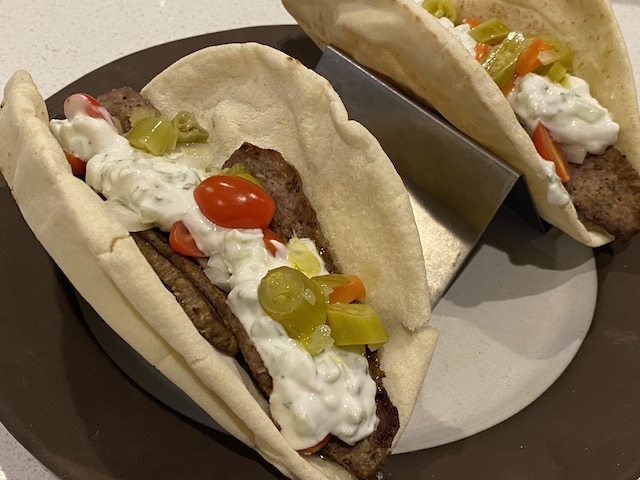 We love Chicago and used to make day trips there several times each year. (It was easy when you just hopped on Amtrak!) One place we always visited was Greek Islands … a traditional restaurant located coincidently in Greek Town!

A couple of times, we even spent the entire day at Greek Islands … just nibbling and drinking. The taramosalata is the best we’ve had anywhere, the flaming saganaki is so fresh and flavorful, and the gyros … well, are just amazing.

While we have found some really great food in the UP, our area is severely lacking in ethnic cuisine. I had my eye on a Gyros and Italian Sausage type place in Wisconsin and a couple weeks ago, we finally made it in. And man, it was underwhelming. The meat was on a spit, so there was THAT, but the pita wasn’t even warmed and fell apart, the onions were huge hunks of unmanageable slices and most ghastly of all, it was served with MAYONNAISE instead of the traditional and far superior Tzatziki sauce. MAYONNAISE!!

So Paul, being Paul, set out to make Gyros at home and let me tell you right here and right now, these are delicious!

Process the onion in a food processor for 10 to 15 seconds and turn out into the center of a tea towel or some cheese cloth. Gather up the ends of the towel and squeeze until almost all of the juice is removed (you’ll be amazed how much juice comes out!). Discard juice.

Return the onion to the food processor and add the lamb, garlic, marjoram, rosemary, salt, and pepper and process until it is a fine paste, approximately 1 minute. Stop the processor as needed to scrape down sides of bowl.

Preheat the oven to 325 degrees F.

Place the mixture into a loaf pan, making sure to press it down into the pan (putting some plastic wrap on top will help you press it down). Place the loaf pan into a water bath and bake for 60 to 75 minutes or until the mixture reaches 165 to 170 degrees F. Remove from the oven and drain off any fat (and there will be fat). Remove the meat from the loaf pan and place on a cooling rack and place a heavy saucepan filled wth hot water directly on the surface of the meat and allow to sit for 15 to 20 minutes, until the internal temperature reaches 175 degrees F. This will compress the meat even further and help to drain.

Slice meat thinly and then sear on one side in a frying pan over high heat (with just a dash of olive oil). You’re wanting to create a nice caramelized crust on one side, like the gyros joint gets off those Kronos gyros cookers on a spit.

Serve on warmed pita bread (we warm in a frying pan, brushing both sides with EVOO) with tzatziki sauce, chopped onion, tomatoes.

Place the chopped cucumber in a tea towel (or cheese cloth) and squeeze to remove the liquid; discard liquid. In a medium mixing bowl, combine the yogurt, cucumber, salt, garlic, olive oil, vinegar, and mint.

Put back in the fridge for 30 minutes to several hours to get the flavors to meld. You may want to season with a pinch or two of additional  salt and maybe a squeeze of lemon juice.

Serve as a sauce for gyros. Store in the refrigerator in an airtight container for up to a week.