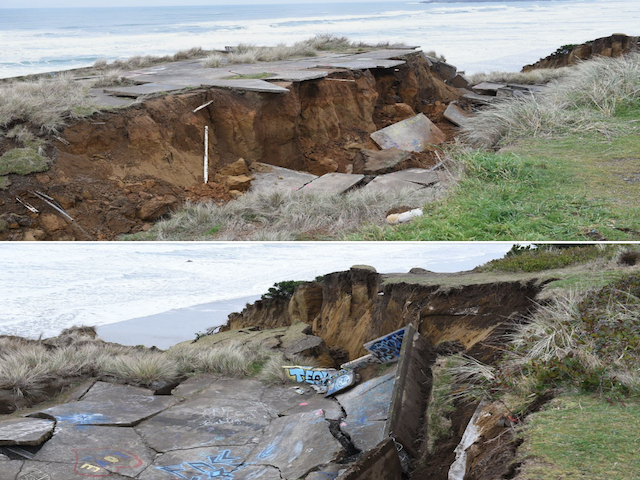 Jump-off Joe was once a 100-foot-tall sea stack geological formation composed of sandstone just down the beach from us at Nye Beach. According to a recent article and photos in the Newport News Times, what remains is falling into the ocean.

Jump-Off Joe was a well-known tourist attraction before World War I. It formed sometime before the 1880s when it was connected to the mainland, and was a major impediment walking the beach. Beachgoers would have to scale the promontory then jump off the side to get over it to go between Nye and Agate beaches. I could find no record as to who Joe was.

It became separated it from the mainland in the 1890s due to waves and erosion, and its large arch collapsed in 1916.

Between 1920 and 1970, the majority of the sea stack collapsed, and by 1990 it had been swept away, and little trace remains today.

According to an article by Madeline Shannon published in the Newport News Times in October of 2018, the area of Jump-Off Joe already had signifiant erosion. A 1,000-foot-long stretch of land 200 feet wide crumbled away in 1943, destroying 15 homes. By the 70s, hardly any signs of Joe remained. Close to 500 feet of land eroded between the 1860s and 2006.

In the 1980s, a foundation for condos was laid before it started sinking and the project was abandoned. The couple who tried to build the condominiums defaulted on their loan and the property now belongs to the Lincoln County.

The county commissioned a study of the land’s condition in 2017. The study documented two main ground fractures generally running parallel to the shore. One more western crack was located primarily underneath the southern slab and is about two inches wide, with a vertical offset of about three inches. The other fissure, between the road and the foundation, varied from two to six inches in width, with a vertical offset of up to 13 inches. The report also noted satellite imagery showed two active landslides at the site.

The firm recommended posting signs to warn of the risk of landslides, demolition of the abandoned foundations and remedial measures like partially filling the fractures with sodium bentonite chips, which would prevent water from entering the subsurface. I did not find any information that any of those measures were adopted.

From the recent drone footage from NNT (the featured photo), it is clear mother nature is handing Joe a decisive defeat. The area has been closed off to traffic and pedestrians. Paul and I would often stop by there on stormy days because it has a great, panoramic view of the Pacific. I always walk past it on my beach walks too.

It is fascinating for us to learn about the history of Newport! Below is an article if you are curious to read more detail about Joe.

END_OF_DOCUMENT_TOKEN_TO_BE_REPLACED 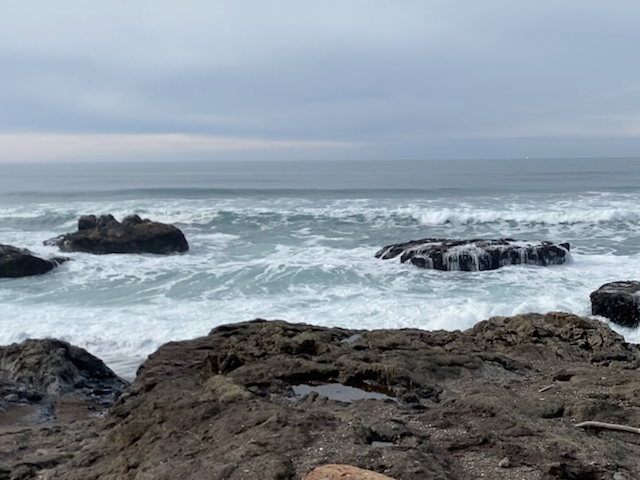 I’ve been so fortunate that for my past two economic development gigs, I’ve had the opportunity to serve truly gorgeous regional of our country. In Michigan, my territory was Iron County, in the wester Upper Peninsula. Here, it’s Lincoln County, on the central Pacific coast of Oregon.

Serving such large areas often finds me zipping from one side of the county to another for meetings and such. I’ve learned to enjoy the journey as much as the destination and try to explore and enjoy nature’s splendor as I drive.

In Iron County, I’d often take Pentoga Trail to enjoy a twisty forest road. Here, it’s the Otter Crest Loop which snakes along a cliff face in an old growth forest that looks straight out of Middle Earth.

Last week, I had to drive down to Yachats for a meeting and got there a little early so I pulled into the Smelt Sands state park (there are over 30 state parks in Lincoln County) and walked out to the 804 trail and was able to watch the surf crash over the rocks for a few moments (that’s the picture above). Moments like these really make you pause and smile!