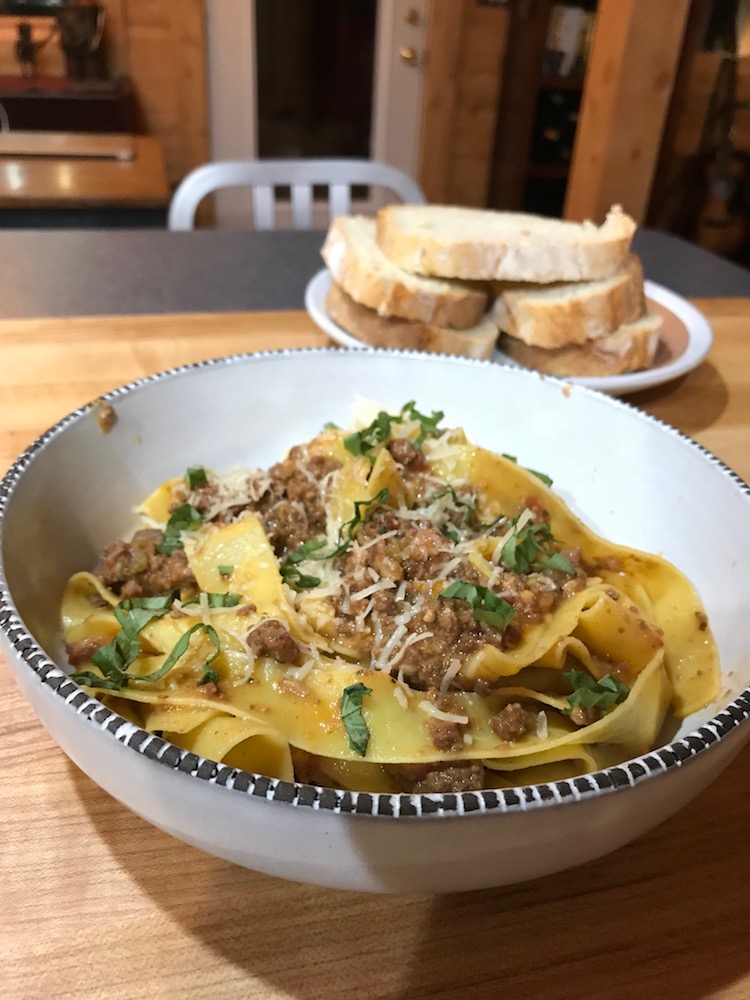 When you want something low and slow (which is exactly what we wanted on a snow day!), this Italian meat sauce is the way to go!

Somedays, we really just want to do long form cooking. This dish has a good amount of prep time but then spends most of the time in the oven developing really deep, delicious flavors. Make no mistake though … this is a meat sauce, not a tomato based spaghetti sauce. This recipes makes a big batch but it freezes great. Cin Cin! (recipe from seriouseats.com)

Adjust oven rack to lower-middle position and preheat oven to 300°F . Place stock in a medium bowl and sprinkle with gelatin. Set aside. Transfer chicken livers to a cup that just fits head of immersion blender and purée until smooth.

Heat olive oil in a large Dutch oven over high heat until shimmering. Add ground beef, pork, and lamb; season with salt and pepper; and cook, stirring and breaking up with a wooden spoon or potato masher, until no longer pink, about 10 minutes. Remove from heat and stir in puréed chicken livers.

Meanwhile, heat butter and pancetta (or bacon) in a large skillet over medium-high heat and cook, stirring frequently, until fat has mostly rendered but butter and pancetta have not yet started to brown, about 8 minutes. Add onion, carrots, celery, garlic, sage, and half of parsley and cook, stirring and tossing, until vegetables are completely softened but not browned, about 8 minutes. Transfer mixture to Dutch oven with meat mixture.

Return Dutch oven to high heat and cook, stirring, until most of the liquid has evaporated from the pan, about 10 minutes longer.

Bring sauce to a simmer, then transfer to oven, uncovered. Cook, stirring and scraping down sides of pot occasionally, until liquid has almost completely reduced and sauce is rich and thick underneath a heavy layer of fat, 3 to 4 hours. If sauce still looks liquid or fat has not separated and formed a thick layer after 4 hours, transfer to stovetop and finish cooking at a brisk simmer, stirring frequently.

Carefully skim off most of the fat, leaving behind about 1 cup total.

Stir in heavy cream, Parmesan, fish sauce, and remaining parsley. Bring to a boil on stovetop, stirring constantly to emulsify. Season to taste with salt and pepper.

To Serve: Heat sauce in a large pot until just simmering. Set aside. Cook pasta in a large pot of well-salted water until just barely al dente. Drain, reserving 1/2 cup cooking liquid. Return pasta to pot and add just enough sauce to coat, along with some of the cooking liquid. Cook over high heat, tossing and stirring gently, until sauce is thick and pasta is coated, about 30 seconds. Transfer to a serving bowl and serve immediately, passing Parmesan at the table.

Cream of Mushroom Soup with Sherry