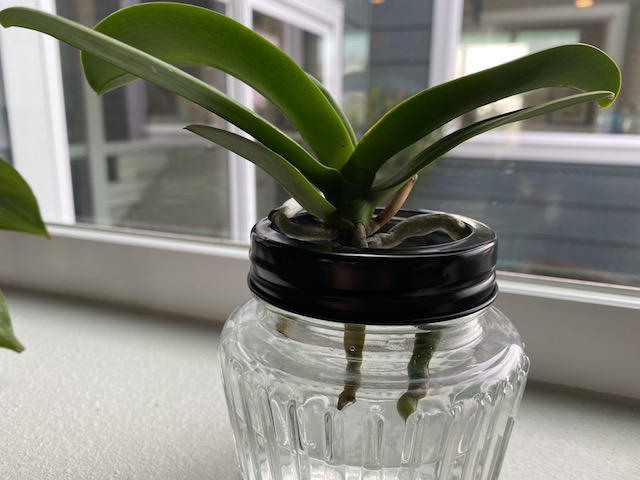 You win some. You lose some. But since I have discovered how easy orchids are to grow and maintain, watching one die has become quite painful. Enter the water-culture.

I have to admit, I am guilty of orchid planticide … the senseless murder of tossing a perfectly healthy specimen after it has finished blooming. But now that I know better, watching an orchid I have cared for struggle to live has had me scouring the internet for solutions.

Many of my orchids are low-cost Phalaenopsis. They are the “ice-cube orchids” sold at grocery and big-box home improvements stores for usually under $10. My guess is these types of plants are grown in greenhouses comparable to puppy mills. Quantity over quality.

I recently repotted several of them and found three orchids had severe root rot (and one with a crown rot but that is for another post). Two of them had no living roots at all so chances of survival are pretty slim.

But one still had a couple viable roots. I followed a tutorial on orchid water culture and so far, the results show promise. Now, a few healthy, new roots have started to grow.

According to the all-knowing internet, this method can be used not just for ailing plants but also as an alternative growing method for orchids. I’ll keep you updated on the progress!

A Not So Ugly Dish Drainer