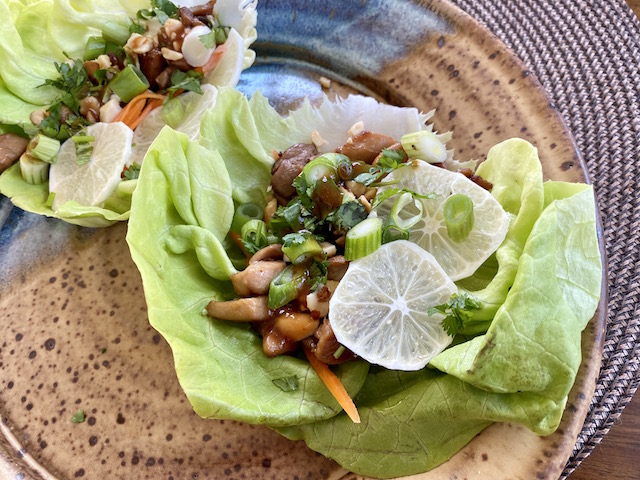 This is a recipe that has so much potential for variation… of ingredients and wine! You’ll notice only the Kick Ass sauce has measurements. Put in more of what you love and less of what you don’t.

END_OF_DOCUMENT_TOKEN_TO_BE_REPLACED 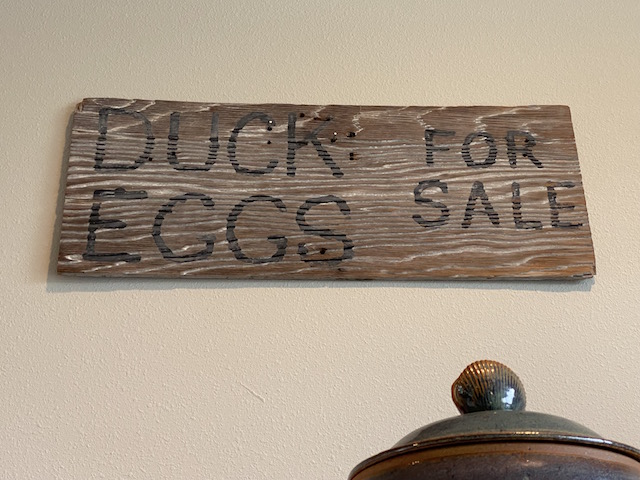 Those of you who have visited us may remember our odd little “Duck Eggs for Sale” hand-painted sign on weathered barn board. Well, there’s a story there…

That sign lived at my Mom’s house until her death in 2008, when I adopted it and placed it in our kitchen.

So we have to go back quite a few decades for the story. Back in the late 1950s, my mom and dad, along with a few other friends, started the Park Ridge Sports Car Club (or PRSCC as we all called it) in the northwest suburbs of Chicago.

The club was a home for car enthusiasts who loved to drive and every month, a committee of members would put on a road rally. In those days, it was basically a scavenger hunt on the twisty back-country roads of northern Illinois and southern Wisconsin.

Each car would have a driver and a navigator, and they’d be given a set of instructions to figure out along the way. It would also give them average speeds and such. There’s be instructions like “Turn left at second opportunity after SRIP ‘cowbell'” or “CAST 43mph”.

SRIP means “sign reading in part.” CAST means “Change Average Speed To.” So you’d have your navigator looking out for clues, and you’d try to stay on course. Along the route (it’d take maybe three hours in total), there would be random checkpoints where spotters would time your car to see how “on target” you were. Any seconds ahead or behind schedule earned the team penalty points.

If you missed a clue or got lost, you’d have to backtrack, but you’d have to go FAST, because you are trying to maintain a precise average speed and stay right on time. I remember my Mom and Dad having this huge clipboard for my Mom to navigate with – there were counters, two stop watches, a Stevens (a mechanical calculator to determine average speeds), roadmaps and the clues.

At the end of the day, the teams would meet at a restaurant for drinks, food and to swap war stories. At the end of the night, they’d give out trophies and dash plaques for the participants. Man, did my mom and dad win a lot of trophies! After my Dad died in ’77, my Mom and I tried to compete (with me as the navigator) – we were terrible!

While most rally committees were ad-hoc, one was a standing committee: the March Committee. Both Mom and Dad were on that – and my eventual stepdad Bob (there’s another story there!). The committee was infamous for designing the hardest, most challenging rallies imaginable – brutal affairs that required a keen eye and crazy driving skills.

Once, in the early 60s (before I was born), one of the March Committee rally clues was “Turn right after SRIP ‘Duck Eggs for Sale'”. Before the rally was run by contestants (usually on a Sunday), the committee would go out on Saturday and run the course – to make sure everything was still in good shape. During this particular drive through, the Duck Eggs sign was gone!

Former but not yet stepdad Bob grabbed some wood and black paint quickly created a replacement sign and nailed it to a tree so the clues would still work.

Then, every year after that, the March Committee would have one clue using that Duck Eggs sign, and the dozens of holes in it attest to how many trees and telephone poles it was nailed upon over the next 25+ years.

So that little sign hangs in our kitchen – reminding me of that awesome club my dad founded that survived for close to 30 years and gave me some of my best family memories. Now that sign is close to sixty years old – I wonder if our kids will ever ask us what it means?

END_OF_DOCUMENT_TOKEN_TO_BE_REPLACED 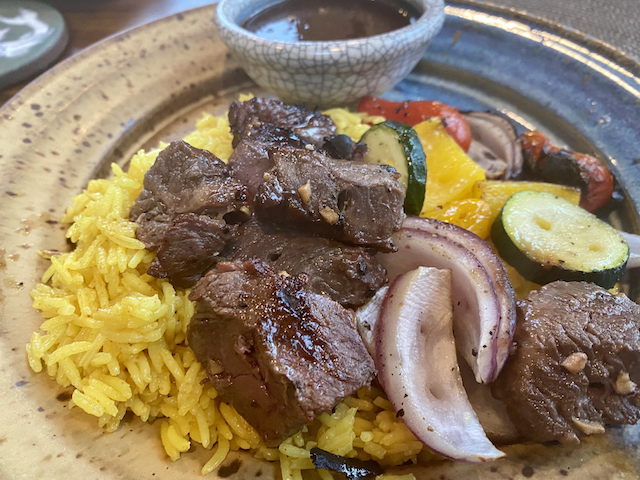 Sometime you just want an easy and super-tasty grilled summer dinner and these kabobs are perfect. Aside from thinking ahead for the marinade, it’s a pretty simply recipe and full of amazing flavor.

END_OF_DOCUMENT_TOKEN_TO_BE_REPLACED 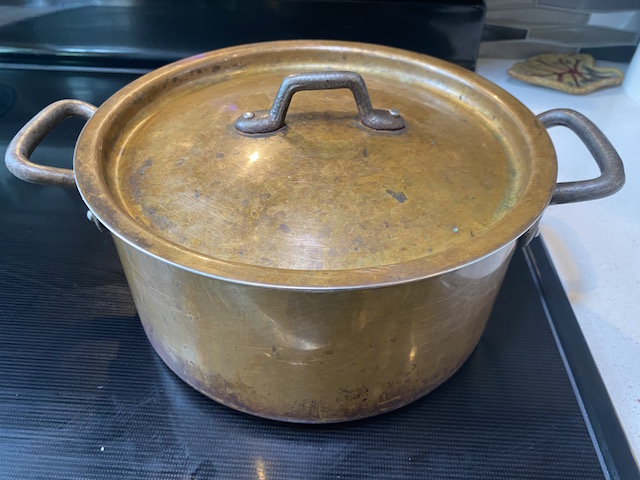 This Matfer Bourgeat copper stock pot is one of the best kitchen purchases we have ever made, and it just gets better with age.

END_OF_DOCUMENT_TOKEN_TO_BE_REPLACED 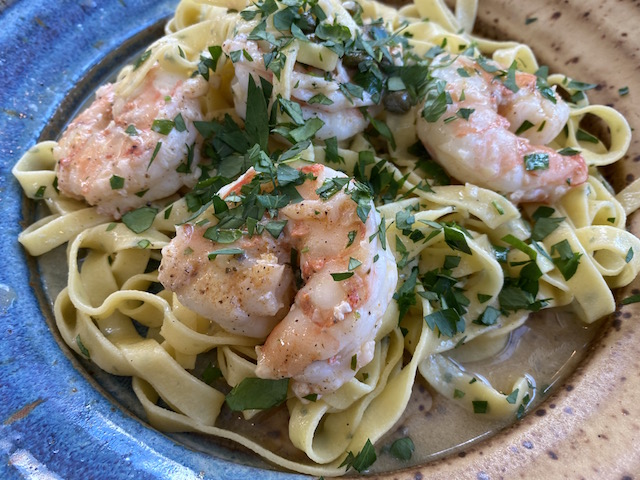 This was a go-to fancy dish when we were first dating. It’s still a classic.

END_OF_DOCUMENT_TOKEN_TO_BE_REPLACED 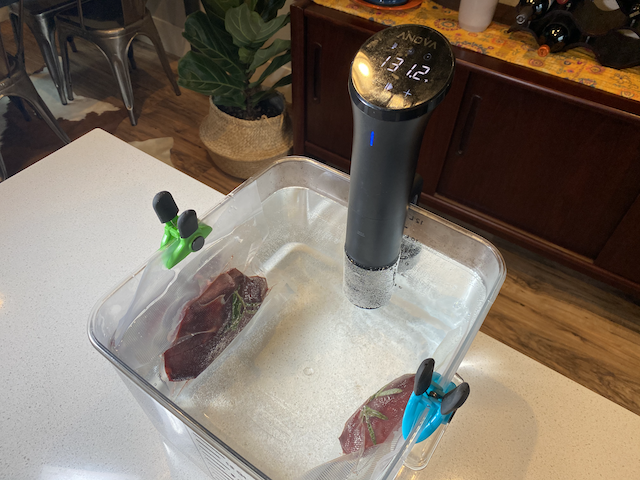 We love watching cooking shows, and over the last handful of years, we’ve seen more and more chefs using sous vide cooking for both protein and veggies. So a few Christmases back, Santa brought us an Anova sous vide cooker (I guess we weren’t that naughty), and holy cow it is awesome!